Oct 06, 2019  Reply Edit Del Re: How to date a M48 Yugo Mauser?-Yugo Mauser? I dunno, but if you drive up in a Yugo, offer a pretty bunch of flowers, and ask it out nicely, you may get a date! I knew someone was going to make a comment like that. I wasn't sure if it was going to be as simple as looking in a book, or what. PaleHawkDown G&G Evangelist. Than you have the M48/63 that is still produced to this day as an hunting rifle. M48: Nov 1950 - Feb 1952- The initial version of the M48, with full crest and all machined steel parts. M48A: 1952-1956- Inclusion of stamped parts. The M48A used sheet metal stampings for the magazine floor plate. Maybe i didn't look hard enough but do these rifles have a production date on them anywhere or do you go by the serial number. My sons rifle is B6276 and my rifle is B9307 or is it that these rifles where made between 1924-1947 and have been rearsenaled to the point where no actual production date can be told. The first Mauser-pattern rifle produced in Yugoslavia was the M24. Its predecessor, the FN Model 1924 had been produced for the Yugoslav army by FN Herstal until the Ministry and FN signed a contract on the purchase of the licence for production of rifles 7.9 mm M 24. Nearly all M24's were produced either before or during World War II, at the Kragujevac Arsenal plant.

Posted by3 years ago
Archived

So you've begun collecting military surplus guns and next on your list is a German Mauser. The Mosin and the Enfield were pretty cheap, but correct examples of German Mausers are going for $1500+! Luckily for your wallet, many countries copied Mauser's 1898 design making a Mauser experience much more affordable. Currently, Yugoslavian Mausers are on the market for a great price, but there are a fair bit variations that you should be aware of before purchasing one. Let’s begin at the beginning.

Model 1924 (M24) With the First World War over, the newly formed country of Kingdom of Serbs, Croats, and Slovenes (later known as Yugoslavia) decided they wanted a standardized rifle for their front line troops. After a brief trials, they came up with an almost exact copy of Germany's K98k rifle--the biggest difference being that the action was 1/8 inch shorter than Germany’s standard infantry rifle. The first 100,000 rifles came from FN, and the remaining examples (which were produced through WWII) were built at the Yugoslavian national armory. There were three main configurations of this rifle: two carbines and one rifle. C&Rsenal did a great writeup on these guns, which can be found here.

These are actually pretty difficult to find because most were refurbished during the cold war (more on this in about a paragraph). However, they are often mistaken for the much more common refurbished M24/47, and so deals can be found. The current rate on a proper M24 is much higher than other Yugoslavian rifles, so expect to pay a premium.

Model 24/47 With the Second World War over and Cold War tensions rising Yugoslavia began preparing for more fighting. To fill their strategic reserve, the young nation began a refurbishment program in 1947 to bring their beaten M24 rifles to tip top condition. This included a standardization of sling swivels, rebluing, as well as scrubbed and re-stamped markings. As we know, the Cold War never developed into fighting and the M24/47 remained in pristine condition. Because of their “recent” refurbishment, they tend to be great shooters. These can be found pretty easily from surplus dealers for right around $300. Action Markings:Yugoslavian Crest, OR Yugoslavian Crest, M24/47

Model 24/52C As 1952 rolled around, Yugoslavia slowed their refurbishment of M24 rifles and and began working on the left over Czechoslovakian vz. 24 rifles (which are different from Yugoslavian M24 rifles!) they received as war reparations. Despite the new rifle (designated M24/52c) resembling the M24/47 rifles, they can easily be identified by their markings. Since the Czech vz. 24 rifles have a history of their own, there are many slight variations that can be found. Depending on the condition of the barrel when rifles reached Yugoslavia, they may have been switched out for a domestically produced M48 barrel. Just like the M24/47 rifles, these guns tend to be in fantastic shape as they never saw action since their refurbishment. M24/52C rifles are slightly more difficult to find than the M24/47 rifles, but they still sell for roughly $300-$400.

Model 98/48 Beginning in 1948, Yugoslavia began repairing and refurbishing captured German K98k rifles. During the process, the German rifles had varying levels of their markings removed with Yugoslavian markings added. As a result, there are a number of variations in the markings that can be found, some of which are listed below. Because they are German made, the actions are full length (as opposed to the intermediate length Yugoslavian Mausers). Action Markings:Yugoslavian Crest 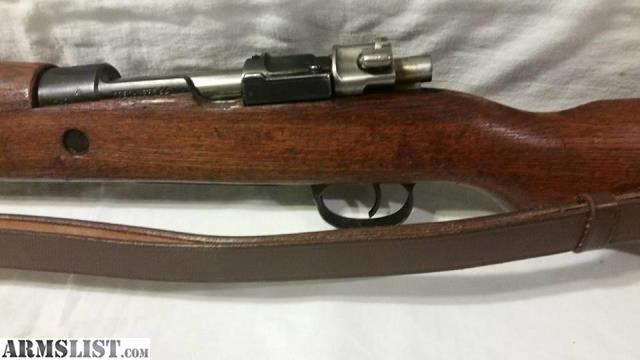 Model 48 In addition to refurbishing guns, the national Yugoslavian armory began production of their new Mauser design, the M48. This new gun had more German features than the prewar Yugoslavian M24 (sight hood, bent bolt handle, cupped buttplate, sling swivel placement), but they stuck with an intermediate length action. By 1952, Yugoslavian engineers designed stamped parts to make production more efficient, resulting in the M48A. This design was updated once again to the M48B (although the receiver crest continued to say M48A). Once again, most of these guns never saw war and are in fantastic condition. For $350 or so, you can find a mint one with a bayonet, cleaning kit, oiler, etc.

In conclusion: Proper German K98k rifles are expensive and highly collectable, making it not necessarily the best choice for a range toy. Luckily, the Yugoslavians made some nice Mauser copies that will give you the Mauser experience at a fraction of the cost. As an added bonus, Yugoslavian M75 sniper ammo has recently hit the market. This highly accurate ammo pairs great with a mint M48 or a nice refurbished rifle. So, if you’re a milsurp guy who wants a nice shooter and doesn’t mind if the gun is of WWII vintage, look into one of the many Yugo Mauser flavors.

The FN Model 24 series is a line of MauserGewehr 98 pattern bolt-action battle rifles produced by the BelgianFabrique Nationale. They are similar to the Czech vz. 24 rifle, featuring open sights, 8×57mm IS chambering, carbine-length barrels, hardwood stocks, and straight bolt handles.

After World War I and the German defeat, Belgium manufactured derivative of the Mauser 98, slightly modified.[1] The rifle series was modified depending on each customer's needs.[2] The designation Mle 24/30 is incorrect strictly speaking, since the Model 24 rifle is different from the Model 30. The confusion comes from the fact both versions were marketed at the same time in the 1930s.[3] The last rifles were produced in 1964.[4]

The Belgian Armed Forces did not order the FN Mle 24/30 before the war. After the war, some training carbines Mle 24 in .22 Long Rifle were produced for the Belgian Army, the Belgian Navy and the colonial Force Publique.[5] The Belgian and Congolese forces also received some .30-06 new-production Mle 24/30 (aka Mle 50) carbines.[6][7] These carbines could be still found in the hand of Belgian reservists until 1986.[8]

A Congolese military policeman with a Mle 24/30 carbine in Leopoldville, 1960.

After the war, the Force Publique of the Belgian Congo received some thousands of newly-manufactured Mle 24/30 carbines.[8] Around 300 training rifles were also delivered.[5] After the independence as Republic of the Congo, the Congo Crisis broke. The FN Mle 24/30 were used during these conflicts, being seen in the hands of South Kasai secessionnist gendarmes or of Simba rebels.[20]

Between 1946 and 1950, the Dutch company Indische Ondernemers Bond (Indies Business Union), bought 2,700 Mle 24 carbines for private security tasks, modified in the Netherlands to fire .308 Winchester/7.62 NATO.[37] The Royal Netherlands Indies Police reportedly also used some. Some were also kept in 7.92 Mauser. They have been later used by the independantist Free Papua Movement.[38]

Israel bought in the early 1950s some FN Model 30 short rifles originally in 7.92 Mauser. They were clones of the Kar 98k and were later modified to fire 7.62 NATO.[38][39] This state also received some Mle 24 training rifles.[8] A few German captured Greek Mauser were also supplied via Czechoslovakia.[33]

From the early 1930s to the end of World War II, the Belgian-made Model 24 short rifle was the standard rifle of Liberian Frontier Force.[40]

Luxembourg ordered some Model 24/30 short rifles around 1930. They were later captured and used by the German Army after the invasion of Luxembourg.[42]

Peruvian soldiers with Model 1935 rifles during a commemoration in 2015. 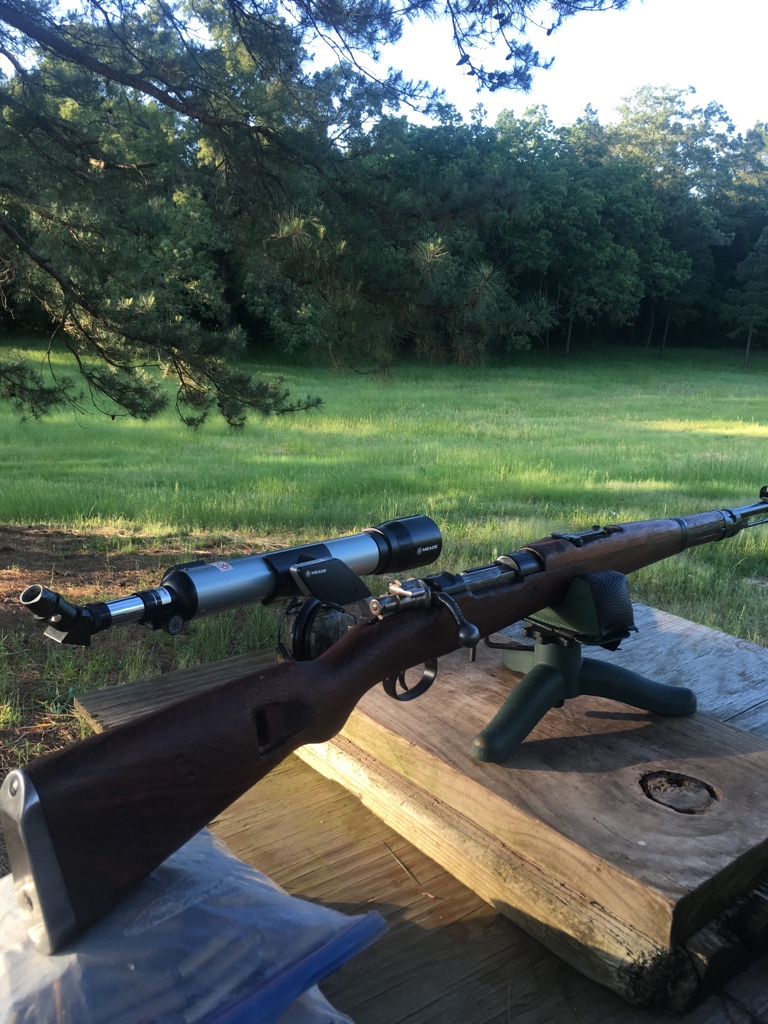 Venezuela ordered 16,500 FN Mle 30 short rifles and carbines in the mid-1930s, firing the 7mm Mauser cartridge.[51] A very small number had a 6 inches (0.15 m) longer barrel, being designed to train the Venezuelan Olympic team.[52] Many more standard FN Mle 30 guns were delivered after the war.[21]

The first Mauser-pattern rifle produced in Yugoslavia was the M24. Its predecessor, the FN Model 1924 had been produced for the Yugoslav army by FN Herstal until the Ministry and FN signed a contract on the purchase of the licence for production of rifles 7.9 mm M 24. Nearly all M24's were produced either before or during World War II, at the Kragujevac Arsenal plant. The M24 and Model 1924 are nearly identical. All M24 series weapons are designed to accept the M-24/48 pattern bayonet.

The final additions to the M24 family were the M24/47 and M24/52 rifles. Both were produced by reworking existing prewar Serbian Model 24 Mausers and then refurbished with newer Belgian parts during World War II at the Zastava Arms (formally Kragujevac Arsenal) plant, which was at that time under the control of the postwar communist government. '47' and '52' indicate the beginning of the rebuild program for each respective model: 1947 for the M24/47 and 1952 for the M24/52. One common misconception is that the M24/47 rifles were produced only in 1947; actually, the rebuild program lasted into the early 1950s alongside new production of M48 rifles. Minor cosmetic differences exist between the M24/47 and M24/52, but the rifles are nearly identical to one another and to their predecessors, the Model 1924 and M24. M24 series rifles were used by the Royal Yugoslav Army and by nearly all sides during World War II in Yugoslavia.

During the Nicaraguan Revolution, FN Mle 24 short rifles were carried by Sandinista rebels.[61]