Scooby, Shaggy, Velma, Daphne, and Fred solve four mysteries in Scooby-Doo's Creepiest Capers. The disc offers a standard full-frame transfer that preserves the original broadcast aspect ratio of 1.33:1. English, French, and Spanish soundtracks are rendered in Dolby Digital Mono. There are no subtitles, but the English soundtrack is closed-captioned. Supplemental materials include music videos, trailers, an interactive game, and a tutorial on how to draw Scooby-Doo and his human partners. Those with access to a DVD-ROM drive can take part in further Scooby-themed activities. This is a fine disc for fans of the dog and his 'meddlin' kid' friends.

Scooby-Doo, Where Are You![5] is an American animatedmysterycomedy television series produced by Hanna-Barbera. Produced for CBS, the series premiered as part of the network's Saturday morning schedule on September 13, 1969, and aired for two seasons until October 31, 1970. In 1978, a selection of episodes from the later series Scooby's All-Stars and The Scooby-Doo Show were aired on ABC under the Scooby-Doo, Where Are You! name and they were released in a DVD set marketed as its third season.[6]

The series centers on a group of characters consisting of four teenagers—Fred Jones, Daphne Blake, Velma Dinkley, and Shaggy Rogers—and the title character, a semi-anthropomorphicGreat Dane named Scooby-Doo. The group travels in the Mystery Machine, a blue and green van with two orange flowers, solving mysteries involving local legends; in doing so, they discover that the perpetrator is almost invariably a disguised person who seeks to exploit the legend for personal gain.

Scooby-Doo's Creepiest Capers (DVD) (Kids TV Favorites) Like yikes! Track down the spookiest cases ever unravelled by Scooby andentertaining episodes. The supernatural sleuthing begins when the gang sPirate in 'Go Away Ghost Ship!' Scooby-Doo's Creepiest Capers is a collection containing four episodes of Scooby-Doo, Where Are You! It was released on video August 20, 2000 and DVD June 4, 2002. Contentsshow Product Description Join the spook-busting, case-cracking, snack-munching fun as Scooby-Doo and the Mystery, Inc. Find great deals on eBay for scooby doo creepiest capers dvd. Shop with confidence. Scooby, Shaggy, Velma, Daphne, and Fred solve four mysteries in Scooby-Doo's Creepiest Capers. The disc offers a standard full-frame transfer that preserves the original broadcast aspect ratio of 1.33:1.

Scooby-Doo, Where Are You! is the first incarnation of what would eventually become a long-running media franchise, which primarily consists of subsequent animated series, several films, and related merchandise.

Scooby Doo, Where Are You! was the result of CBS and Hanna-Barbera's plans to create a non-violent Saturday morning program that would appease the parent watch groups that had protested the superhero-based programs of the mid-1960s.[7] Originally titled Mysteries Five, and later Who's S-S-Scared?, Scooby Doo, Where Are You! underwent a number of changes from script to screen (the most significant being the downplaying of the musical group angle borrowed from The Archie Show). However, the basic concept—four teenagers (Fred, Daphne, Velma, and Shaggy) and a cowardly, clumsy Great Dane (Scooby-Doo) solving supernatural-related mysteries—was always in place.[8] 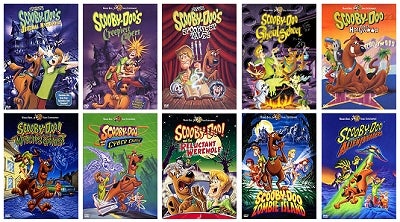 Scooby-Doo creators Joe Ruby and Ken Spears served as the story supervisors on the series.[9] Ruby, Spears, and Bill Lutz wrote all of the scripts for the seventeen first-season episodes, while Lutz, Larz Bourne, and Tom Dagenais wrote the eight second-season episodes with Ruby and Spears as story editors. The plot varied little from episode to episode. The main concept was as follows:

The second season featured bubblegum 'chase scene' songs produced by La La Productions (which had originally been contracted to create the music for Josie and the Pussycats, the first of many animated series made from the same mold as Scooby-Doo, Where Are You!). These songs were written by Danny Janssen and Austin Roberts, and were performed by Roberts, who also made a new recording of the Scooby Doo, Where Are You! theme song for the second season. The series' theme song has been covered by several subsequent artists, including Matthew Sweet for the 1995 TV special and album Saturday Morning: Cartoons' Greatest Hits; Third Eye Blind for the 1998 film Scooby-Doo on Zombie Island and the 2003 film Scooby-Doo! and the Monster of Mexico; Billy Ray Cyrus for Scooby-Doo! and the Witch's Ghost (1999); Jennifer Love Hewitt for Scooby-Doo and the Alien Invaders (2000); the B-52's (Cindy, Kate and Fred) for Scooby-Doo and the Cyber Chase (2001); MxPx for the live-action Scooby-Doo film (2002); and Krystal Harris for Scooby-Doo! and the Legend of the Vampire (2003).

Scooby-Doo, Where Are You! utilized a laugh track, a common feature in most animated TV series until the late 1970s. It was removed for syndication in the 1980s. Following Turner's purchase of Hanna-Barbera and its networks' (TBS, TNT and Cartoon Network) initial broadcast of the series in 1994, the laugh track was reinstated in 1997.

Scooby Doo, Where Are You! was a hit for Hanna-Barbera and CBS, which led Hanna-Barbera to eventually create series with similar concepts on ABC, NBC, and CBS, including, Josie and the Pussycats, The Pebbles and Bamm-Bamm Show, The Pebbles, Dino and Bamm-Bamm segments on The Flintstone Comedy Show, The Funky Phantom, Speed Buggy, Jeannie, Jabberjaw, The Amazing Chan and the Chan Clan, Inch High Private Eye, Goober and the Ghost Chasers, Clue Club, Captain Caveman and the Teen Angels, Butch Cassidy and the Sundance Kids, and The New Shmoo.

On July 4, 2002, Warner Home Video released four episodes from the series on a compilation DVD in Region 1 entitled Scooby-Doo's Creepiest Capers. They later released all 25 episodes on DVD in Region 1 on March 16, 2004 under the title Scooby-Doo, Where Are You! The Complete First and Second Seasons.[13] A DVD entitled Scooby-Doo, Where Are You! The Complete Third Season was released on April 10, 2007, made up of episodes produced in 1978, added to the Scooby's All-Stars package, and later syndicated as part of The Scooby-Doo Show.[14][15]

On November 9, 2010, Warner Home Video released Scooby-Doo, Where Are You!: The Complete Series. The eight-disc set features all 25 episodes of the series plus the 16 episodes produced in 1978 which aired as part of Scooby's All-Stars. The set is encased in special collectible packaging in the form of a Mystery Machine replica. It also features a special bonus disc filled with new and archival material.[16] The set was re-released on November 13, 2012.

Starting on January 27, 2009, Warner Home Video released single-disc DVDs with four episodes each plus an episode from Shaggy and Scooby-Doo Get a Clue. Four volumes have been released through October 19, 2010.[17]